Schedule Your Consultation with Dr. Prasad Here
Click Here
No, it’s not the mouse version of a Mohawk. These creatures, the subjects of a new study, were implanted with follicles made from human cells, which soon took root and grew normally.

Only slightly less creepy than this mouse with human ear cells on its back, the animals would even grow their new hairs back if they were plucked out.

The team that conducted the research came from universities across Japan, and was led by Dr. Takashi Tsuji, a professor at the Research Institute for Science and Technology at Tokyo University of Science (TUS).

Dr. Tsuji’s lab at TUS specializes in cutting-edge regenerative medicine, and was also responsible for the 2011 experiments that used stem cells to regrow a tooth in a mouse’s mouth.

As for the new research, Dr. Tsuji told the Associated Press, “At this point, this kind of precise cellular operation is only possible by our team.”

To produce the cells the scientists implanted in the mice, they had to make the hair follicles from scratch, mixing two different types of cell to create a “seed” follicle— they created these seed cells from mouse embryos, adult mice and finally adult humans.

The rats in the photos below demonstrate human hair growth, an exciting prospect for researchers hoping to treat baldness in people.

But don’t toss out your Rogaine yet. As ScienceNews.org noted, “these findings do not show whether the number of human hair follicles can be amplified, so that more hair is produced”— as it is, the hairs had to be implanted one at a time, which could be a much bigger job on a balding human than on a mouse. 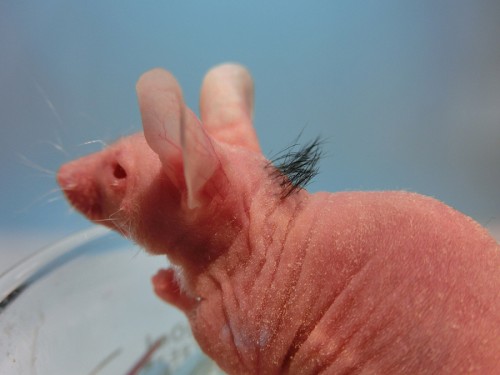