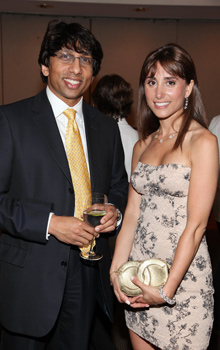 This past Tuesday night, the School of American Balletheld its annual Workshop Performance Benefit honorting Robert Fribourg with a performance at the Peter Jay Sharp Theater at Lincoln Center. Mr. Fribourg has been the Chairman of the SAB Board from 2004 until this year. He has also been a major supporter of the School and the ballet.

The annual Workshop Performances are SAB’s only public performances and a rare opportunity for the lucky attendees to get a glimpse of the ballet world’s future young stars.

A Benefit Dinner and dance were held in the school’s studios at Lincoln Center followed the performance. More than 600 arts patrons, corporate supporters and New York’s social world attended.

THE SCHOOL OF AMERICAN BALLET is the preeminent academy for classical dance in the United States. Faculty, students and alumni all share an ethos of rigor, passion and professionalism. The School is shaped by the artistic principles of founder George Balanchine, who developed a uniquely American way of dancing emphasizing speed, musicality and expansiveness. Led by Artistic Director Peter Martins, SAB is the official school of New York City Ballet. In addition, no other American school has placed as many students with professional companies domestically and abroad.